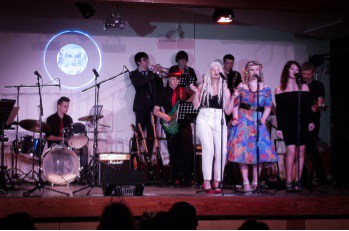 For the third year running, students from the Ysgol Gyfun Emlyn Music and Music Technology departments presented an original and aspirational pop music concert in two local venues: “Jarvis Cocker and the Divas” was performed in the school hall on February 26th 2018 and then at Theatr Mwldan in Cardigan on February 27th. The show was a continuation of the “…and Friends” concept explored in the previous two years, this time hosted by Pulp frontman Jarvis Cocker played extremely convincingly by year 13 student Caleb Evans. Caleb sang his way through a few of Pulp’s greatest hits before introducing each of the six ‘Divas’ performed by year 11 and 12 girls: Lauren Hutchinson (Peggy Lee), Florence Gunn-Wilson (Joni Mitchell), Cerys Lloyd (Belinda Carlisle), Katie Jones (Christina Aguilera), Megan Lote-Williams (Mariah Carey) and Tiffany Edmonds (Béyonce). Special guests were the influential dance music producers Daft Punk, who were played by Ben Thomas and Ben Dodd complete with robot helmets and a complex array of music performance technology! The logistics of creating a show of this scale is of course complicated by the issue of moving from one venue to another. However, a committed team of students volunteered considerable time and energy to facilitate this, learning in the process a great deal about the technical aspects of professional music concerts involving sound equipment, theatre lighting and associated computer technology. Both performances of “Jarvis Cocker and the Divas” were enthusiastically received by wonderful audiences, and a huge sense of achievement by all those involved.t was enjoyed by all involved.