On Friday, 11th January 2019, students of Art and Photography visited two London galleries in preparation for their upcoming Examination Units and to enhance their contextual understanding.  The first stop was The Saatchi Gallery where pupils were given a guided talk around the Black Mirror exhibition.  The Saatchi is well known for promoting new artists and the focus of this exhibition was on art as social satire.  The works were vibrant, challenging and occasionally absurd but certainly invited the pupils to question ‘What is Art?’  Many pupils had never visited an established gallery and the experience did not disappoint! 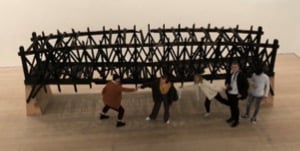 Similarly the Tate Modern, with its extensive collection covering several floors, caused wide eyed wonder and enthusiasm.  The Turbine Hall (Hyundai Commission) was showing an installation piece by Tania Bruguera called ‘10,148,451’.  The work’s title is an ever-increasing figure reflecting the number of people who migrated from one country to another last year added to the number of migrant deaths recorded so far this year – a response to the global migration crisis.  Her art comprises of a largeheat-sensitive floor.  By using your body heat and working together with other visitors, you can reveal a hidden portrait of Yousef, a young man who left Syria to come to London. Meanwhile, a low-frequency sound fills the space with an unsettling energy. In a small room nearby, an organic compound in the air induces tears and provokes what the artist describes as ‘forced empathy’. Many students became part of the artwork by having their senses activated in what they named the ‘Crying Room’ while others lay on the floor to help reveal the artwork.  Once again, the trips success was enhanced by the exemplary behaviour of the students and a special thank you is given to Marion Peckham, school governor, who kindly accompanied us on this trip. 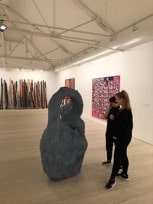